[Press Release] - A Collection of Stories

[Press Release] - A Collection of Stories

In this special press release, we'll have a collection of stories before Public Affairs existed.
Back then, we used unofficial ways to publish screenshots and information. Today you'll find every single story here.

In this Press Release:
The Cityhall is now a crime scene 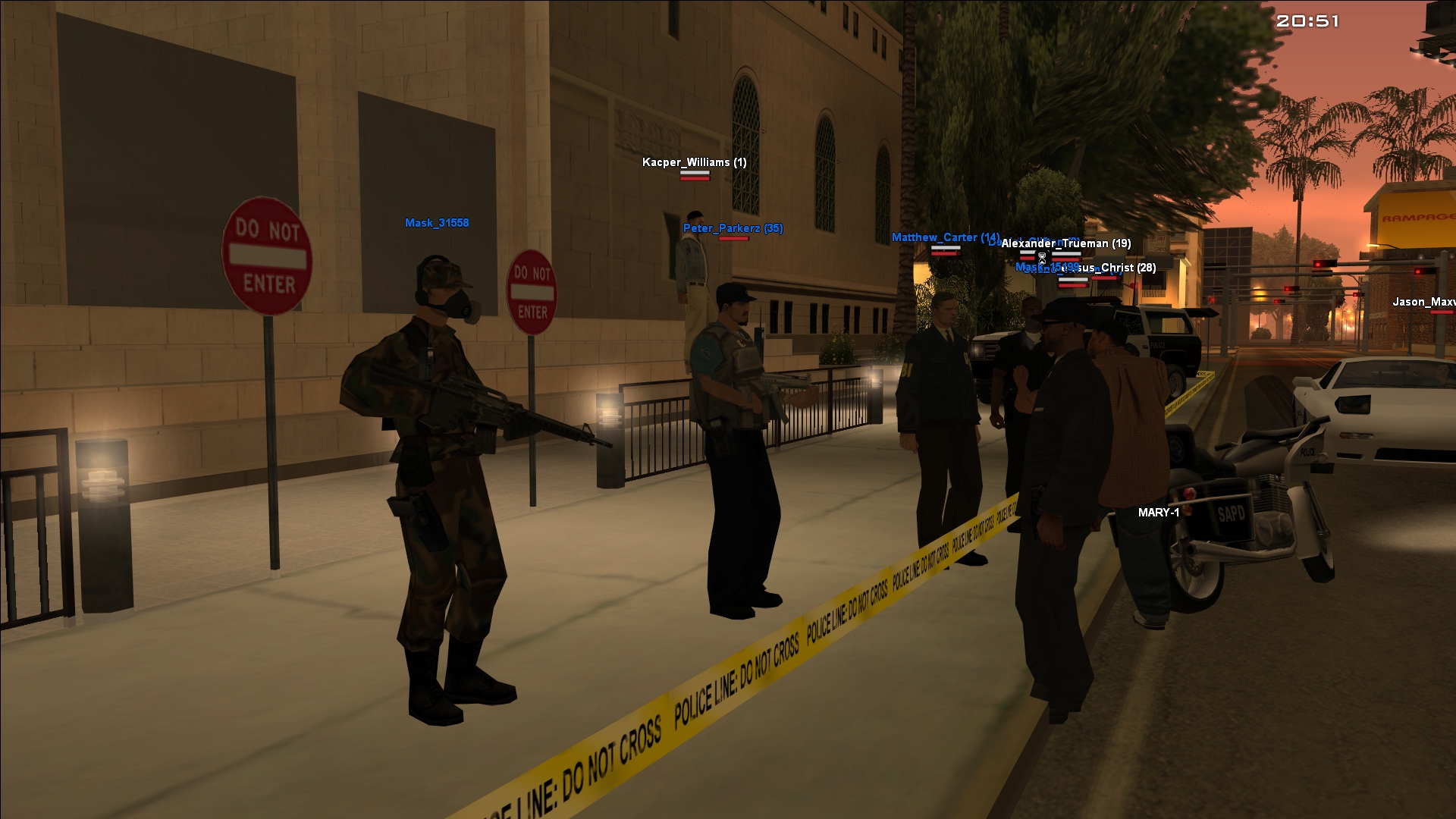 SRT and FBI Agents at the Cityhall investigating, trying to find information that led to the sudden death of an unarmed civilian at the stairs of Cityhall.

After the sudden death of a civilian outside Cityhall SAPD immediately closed it down and handed this exceptional case to the Federal Bureau of Investigations to investigate and find the person responsible for the death of a citizen.

Hours later, the criminal was found and arrested by the authorities, and it's worth to note that the criminal attempted to sabotage the Governor by this action.
Crowd Control

Photograph from the perspective of Police Officer II Jake Randall during the ceremony.
During the ceremony, SAPD's role was to protect the Cityhall from any attacks and make sure that the process is done swiftly.

Everything went fine, and the ceremony ended thanks to SRT and SWAT peacefully.
Alone we can do so little together we can do so much.

Officers are arresting a criminal for escaping from the authorities.
After a pursuit that lasted more than 60 minutes, starting from Market at Los Santos and ending at San Fierro Police
Department suspect Mario Soprano was placed in custody.

The unique of this pursuit is that although SAPD had visual of the suspect the whole time, they were unable to intercept him and give an end to this long pursuit.
SWAT destroying a weed field

In the picture, naturalized suspect that guarded the weed fields as well as SWAT officers with flamethrowers destroying the weed.
After receiving a 911 call, SWAT team sent an unmarked helicopter to check and confirm the weed field at Mountain Chiliand.
The report was confirmed, and the SWAT team deployed to destroy the weed field, they also took down three suspects without taking any casualties in the side of the authorities.
EMS arrested after evading with a helicopter

In the back of the cruiser, known Corrupt medic Hilly Lord arrested.
A medic wanted for disturbing the peace attempted to escape using an aircraft, then Derek Carter, Chief of Police, deployed a Hydra and took the helicopter down.

The suspect managed to parachute, and after landing, he gave up to the authorities.
The heroes of SAPD

Known criminal Ned Gambino arrested after nuking ATMs.
Everyday Police Officers get involved in numerous situations; some of them marked as high risk.
In this case, an Infernus was evading starting a pursuit at Commerce, Los Santos and ending in the highway of Las Venturas.

What makes this case unique is that although it was an Infernus, SAPD managed to stop it using only cruisers and an aerial unit.
Our Active Team

In the picture, all on-duty Police Officers responded to a large gathering at Temple PNS.
The activity of SAPD is very important, it has to have officers available anytime in the day, no matter the difficulties.
More Police Officers mean a clear advantage in situation handling; every Police Officer feels safer when they have more partners around them.

SWAT and Field Officers are performing a Felony Stop at Mulholland Intersection.
Every single day Police Officers are becoming get smarter from the previous day; this is something nobody can deny.
Being a Police Officer makes you get involved in situations, and from these situations, you get experiences, making you a better person.

It's the unique part of our job, we get to meet so many people, and our job is all about dealing with them.
Steps to make Cadets more efficient

A conversation between High Comand, Academy Division, and Field Officers about Cadets.
"Cadets are the next generation of Police Officers, make them the best possible!" - Chief of Police Derek Carter.
Recently, SAPD has placed lots of efforts into recruiting the best Cadets as well as training them in practical ways.
A well trained Cadet will later be a proper Police Officer, providing quality service and achieving a lot in the department.

After the conversation, Courses were introduced, you can find more about them on Press Release 3.
Lets Go

Police interrogating a known criminal after a pursuit.
Kiwi Eix was a known criminal, known for murdering two citizens.
After an investigation, SAPD was able to track him down using unique tracing systems and bring him to justice.

The person attempted to murder several Police Officers that tried to arrest him but failed.
The title "Let's Go" was used as a motivation for Police Officers never to give up.
We Fight Together

In the picture, SAPD'S entry to Gambino's HQ.
SAPD is getting involved in situations that involve lots of people every single day.
One of them was to arrest or neutralize several known fugitives.

In the picture, it is visible that lots of their members were naturalized, others arrested and took by the SWAT team.